In the usual Hubble Space Telescope (HST) palette we use three channels - Ha, OIII and SII. These are normally combined into a colour image assigned to the following channels

This combination is often called SHO - taking it's name from nothing more than the first letters of the relevant filter in the RGB channels as listed above.

Once combined into these channels then processing needs to take place in order to bring out all of the detail and colours.

Here is something that I made up that I called a process map. The first rather dark picture shows how the combined image looks before any processing has been done and it has just been combined. Once a couple of standard curves are carried out then it becomes rather green as the picture top right shows, After more processing it becomes the image at the bottom. 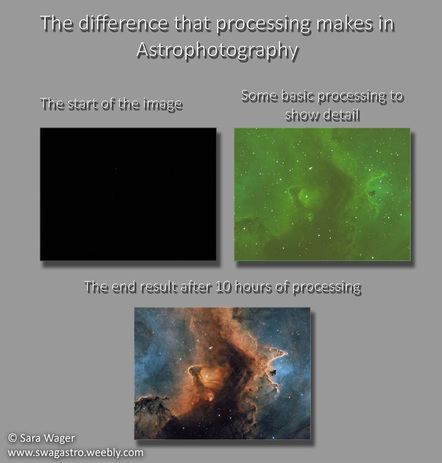 The point that I am making here is that this has taken 3 lots of data from three filters to get the data.

I normally capture a minimum of 10 hours of data in EACH filter, so gathering enough data for these HST palette images can take a lot of time.

This got me thinking about whether there was another way.... to create an image from only ONE channel..... so I set to work.

Monochrome Colour Mapping (MCM) - what is it?

Essentially what I am doing is collecting Ha data and using it to create colour in different channels. I am at great pains at this stage to say that this is NOT scientific in any way.... The colours of the images I create using the MCM technique are chosen totally arbitrarily by me..... In usual circumstances the colour would be able to provide some scientific basis of colour separation within the image indicating where the light from different filters passes through and hits the sensor..... In this case there is NONE of this.

I really do want to emphasise this point, and can not do so strongly enough. I do not want people to look at these images as anything more than an ARTISTIC INTERPRETATION by me as to where the colour should be and how I would like to colourise the image.

If I say that the image contains all three channels (or two in the case of a bi colour) then that's what they contain.... I would NOT create an image using this method and try to pass it off as a normally acquired HST image, even though it could easily pass as one.

Here's a couple of examples of what I have produced using this MCM method and only one channel of data - In these cases it has been Ha, but I see no reason why any filter with enough signal could be used in the same way.
So what do people think of this? I've opened up the debate on an Astronomy forum to see what people think of it and whether it's OK to do it..... the general idea was that as long as it is CLEARLY stated and not trying to fool anyone into thinking it's a genuine HST image then that was OK.

I opened a similar debate on Face book and again the general consensus was very similar. There were some people who felt uncomfortable with it and I totally understand why. In todays world of communication, image sharing and social media, while I am VERY upfront and HONEST about what the image is composed of and how it's made, if it's shared without the same information there's a danger that it becomes seen as a defacto Hubble palette image and so can in time become a standard when the true image where filters are used can get a very different colour separation for example..... will people begin to think that my image is the 'correct' example ....... I see the dilemma.

But how great to be able to produce a colour image from only one set of data. As I continue with this experimentation, i will add to it and you can see the different styles that can be attained. I guess what is difficult is that we are so used to the traditional Hubble palette images now that it is very hard to deviate from them..... not consciously, but I like the blues and yellow / orange hues that are produced...... so I tend to continue to use them.

The two images above were used to almost reproduce the HST palette - Again NOT as an experiment to fool any one or try to trick people, but because I wanted to see what was possible. Now I am moving away from that a little and instead of using a HST palette image as a reference for where to put the colour, I am feeling more comfortable to put it where I want! 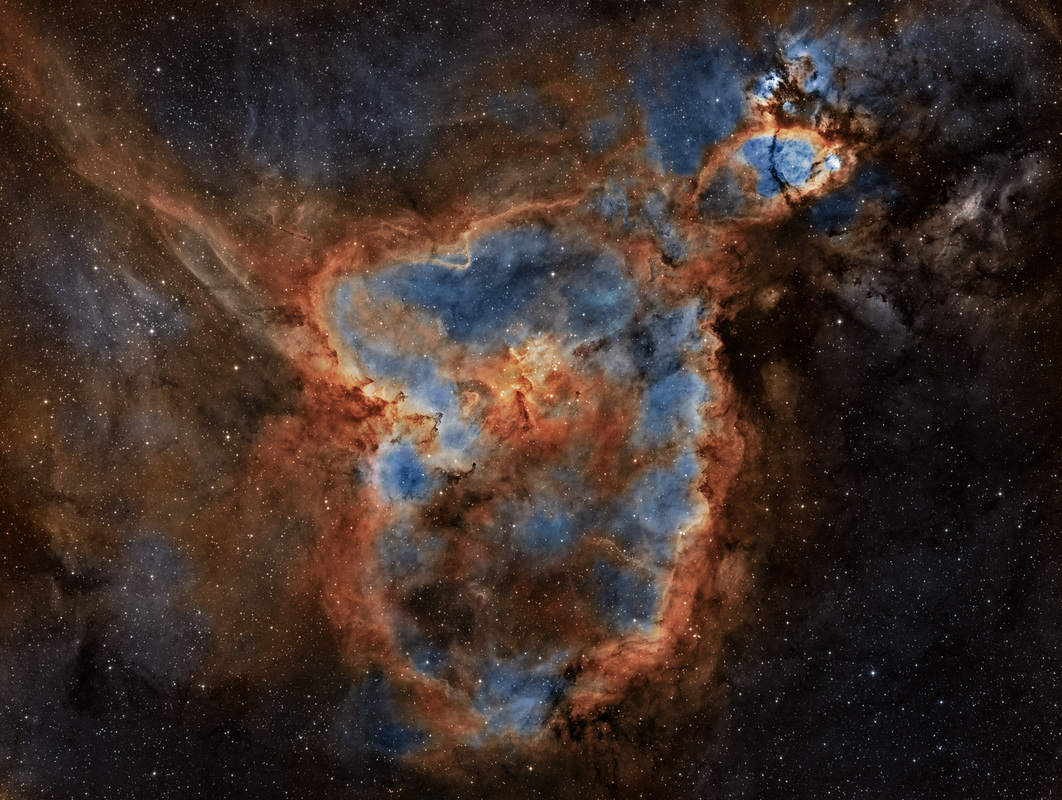 An artistic impression - All new ideas have to start somewhere ....... will this catch on?

This is an artistic impression of IC2177 - The Seagull nebula. In this instance I didn't set to emulate the normal Hubble palette with regards to colour separation. I didn't have another IC2177 as a reference image, I just put the colour where I thought it would look best. I am using the more traditional Hubble Palette type colours, not as an attempt to deceive, but because despite spending many hours trying with other colours, these just look the best and that is that!!!

This image is using 28x900s of Ha data - so 7 hours of total exposure. To be able to create such an image with 7 hours worth of data certainly has merit in my book..... as long as it's made clear just what it is. 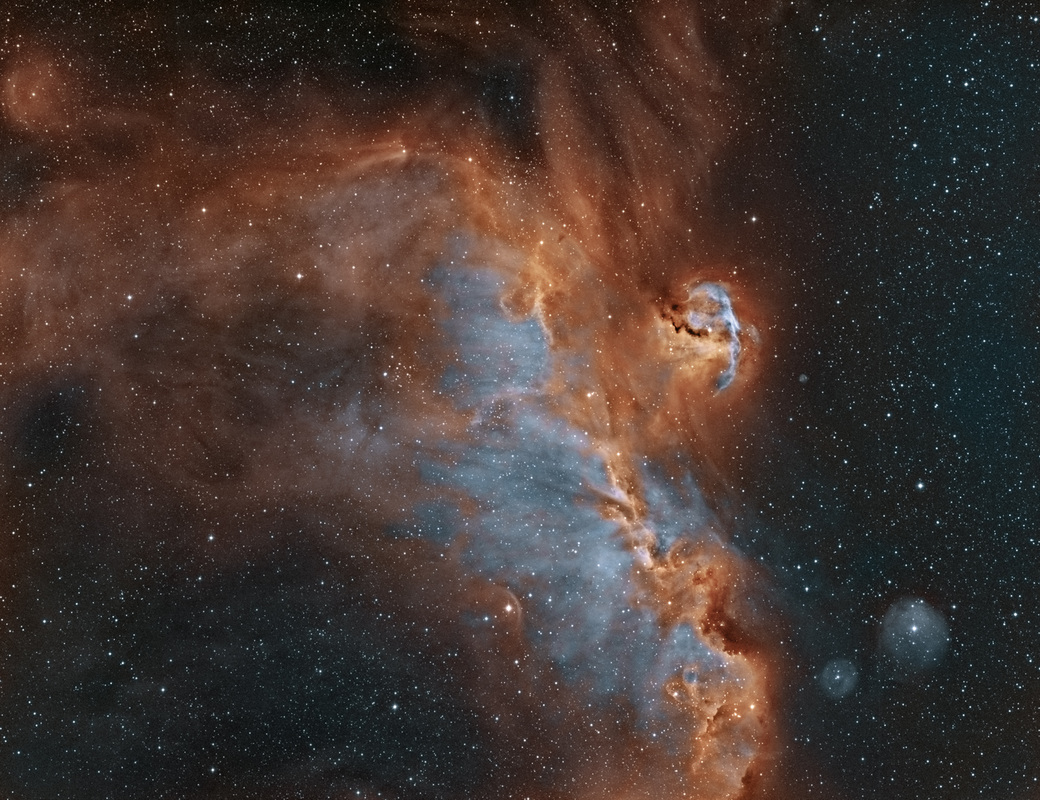 This 2 pane mosaic image of the Butterfly nebula was only ever taken in Ha and so was a mono image. Using my MCM processing technique I was able to give it colour and vibrancy. While the colours are close to my choice for Hubble palette, the actual colourisation of the Butterfly itself is purely artistic and I have the colour in a way that I feel enhances the detail. Side by side you can see the mono data that this image was created from.