What is dual imaging?

As you can see below, it really is as simple as two scopes, 2 cameras and associated bits (such as filters) all on the top of one mount.

Getting a dual imaging rig up and running

In order to maximise the amount of imaging time available I decided to look into a dual imaging rig. It's been a difficult journey and so I thought I'd document much of it as well as my thoughts and findings in the hope that it may help people who are considering the same thing.
​

What is the point of a dual imaging rig?

Plain and simple - I wanted to increase my imaging time. A simple example....... Say that in one night, with one scope I get 10 hours of imaging, which in my case is 20x30 minute exposures. Get two scopes up and running at the same focal length and your 10 hours and 20 exposures has in effect become 20 hours and 40 exposures.

In this simple example I haven't allowed for focus time, plate solving etc and all the other small things that eat into the basic imaging time. Of course with 10 hours we never get 20 exposures, perhaps 19.
​

Is there different types of dual imaging rig?

The answer to this (in my opinion) is in effect yes. My thoughts are that there's two ways to tackle a dual rig. Either a pair of fully compatible scope / camera combinations that give you to equal fields of view, or you can have a widefield scope and a longer focal length scope all working at the same time, but using the longer focal length to give higher resolution detail in specific area of the widefield field of view.

I decided that I wanted to increase my imaging time and so I went for a system that would give me a near identical field of view in both scopes, This way I could combine the exposures of both and in effect double my imaging time.
​

I am using Baader RGB filters in the QSI683 and Astrodon 3nm narrowband filters. These are far from cheap and so I decided to look closely at the filter combination I could use in the second camera. Obviously with a 5 position filter wheel I couldn't have a full set of filters.In the end I decided to get the following filters in the second camera I decided that using this combination I would get the best out of imaging time with two scopes. Scope 1 can collect RGB while the second does luminance. Or in the case of narrowband scope one can collect SII, while the other can collect OIII and then the next session both can collect Ha.... that was my sort of reasoning.

Camera wise I couldn't really afford a second QSI, so I looked around for a cheaper camera with an internal filter wheel and with good cooling. The Moravian 8300 was the obvious choice for me, it ticked all of the boxes. I had to get the various adaptors in order to get the spacing correct for the reducer...... In the end I got a bespoke adaptor made to connect from the M56 thread of the CA35 to the M48 thread of the Moravian

This was how I got the adaptor made up including the spacing..... it is excellent and ensures that my spacing is correct​ 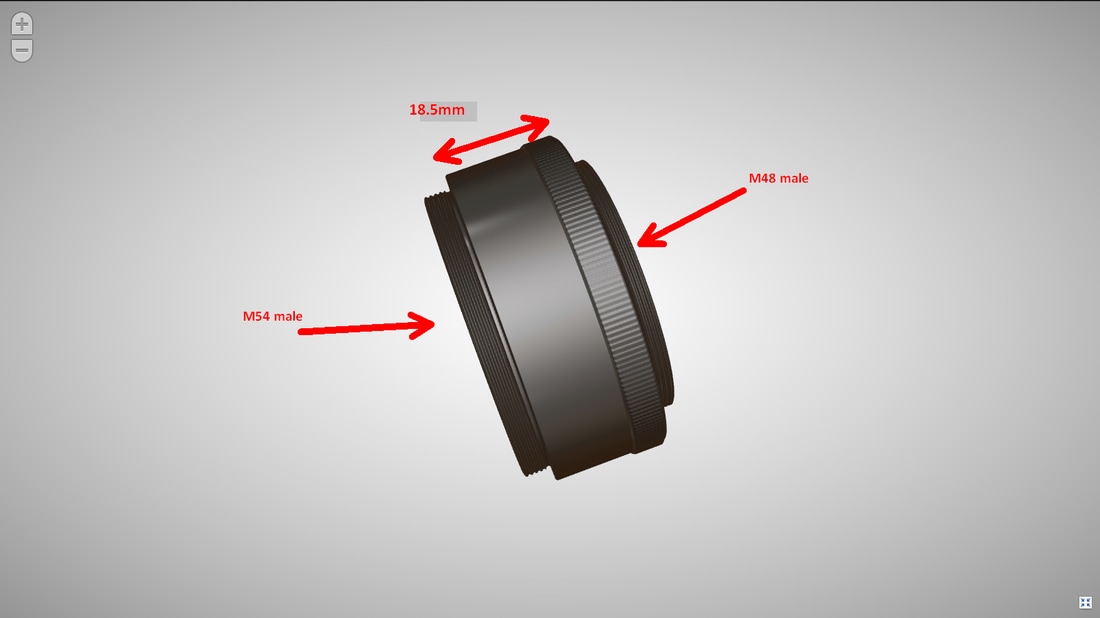 I used an Altair Astro Losmandy bar with a saddle attached on one end. This was for scope 1. For the other scope I needed some form of adjustment as I needed to ensure that the field of view matched up. This was specifically relevant as the scope and camera combination of both scopes was to be the same so that the data could be blended together. There was an option of an ADM adjustment saddle, but I heard from a couple of people that this didn't work as advertised and they had returned theirs.

​I found that First Light Optics were now selling the JTD Adjustment saddle.
People have kept asking me why I am using a separate guide scope and not an Off Axis Guider (OAG) as I do normally. What I have discovered is that you are unable to use an OAG on a dual system. Imagine the following scenario.......

Scope 1 has an OAG and is therefore in control of the guiding. Scope 2 is acting as a 'slave' and is just taking images all night as I don't use software that can in effect control and coordinate two scopes. If scope 1 starts to refocus in the middle of an exposure in scope 2, then the guiding will go all over the place and the exposure in scope 2 will be ruined. To that end, in a dual rig you need to have a separate guide scope that will continue to guide totally independently of any focus routine that will be going on.

Initially I set up my dual rig using the Takahashi clamshells. The reason for this was that i was already using them on the one scope and I wanted to keep the height and position of the two scopes the same...... At that stage I hadn't considered the absolute essential need of an adjustment saddle so thought that as long as I had the same fixing system then the scopes would be aligned.... Wrong!!! With the tolerance of production being in parts of a mm, that sounds OK, but imagine the difference that 0.5mm at the scope makes when you are looking to the sky. It wasn't going to work without some form of adjustment.

The pictures below show the first dual system setup that I used. Both scopes used the Takahashi clamshell fixing.
Here you can see the Clamshells on both the scopes that have now been replaced with scope rings. The clamshells only hold a small portion of the scope in place with one main point of contact (albeit it rather wide!). The scope rings are able to be placed at two ends of the scope so although they are not holding such a wide area, their two point fixings ensure zero movement at all. Also, I'm not sure that for a dual rig the guide scope was secure enough in the Baader clamp on top of the clamshell on scope 1. To negate this potential issue I did later put the guider on the middle of the dovetail bar between the scopes, but this did not solve my problems. Now you can see that the guider has been fixed to the top of the scope rings with a rather over kill Losmandy dovetail, but there's NO way that there's going to be ANY movement between the guide scope and the imaging scopes.

In the end I bit the bullet and bought and fitted some 95mm Scope rings from Prima Luce....... 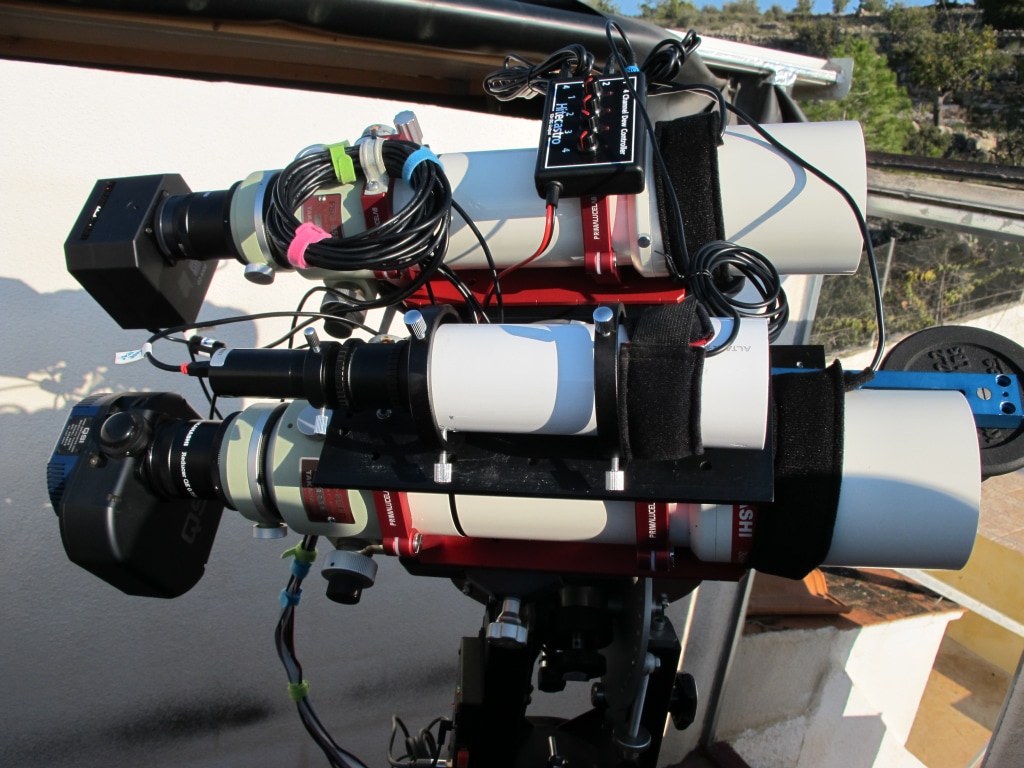 This is the current setup. The Prima Luce rings have been a revelation and frankly have fixed the problems I had with flexure. You can see that at the front of the scopes I've had to attach extra weights as the scopes were back heavy and there was no way I could move them forward sufficiently to balance. The weights are on a long vixen dovetail that can be slid up and down the middle bar so that the weight can be adjusted.

You can't see it from here, but in the middle of the scopes is a powered USB hub, This is taking the USB cables from the 2 imaging cameras and the Lodestar guide camera. This way there are less cables dragging at the back of the setup. At some stage I will look at changing the cables for shorter ones so that I don't have a almost 3m coil of cables to secure which is currently looped and attached to the top of the scope rings.
​

What problems was I experiencing?

I was getting flexure pure and simple. This means that somewhere in the setup, something was moving independently of the guide scope.

This suggested to me that the flexure was not between the guide scope and the imaging scope, as each time the guider gave round stars on the scope it was attached to. I tried to put the guide scope in the middle of the two scopes on the Losmandy bar and then I got elongated stars in both scopes.

The fact that the stars were round in scope 2 when it was being guided also gave me confidence that the issue wasn't with the adjustment saddle and that it wasn't flexing.

The long and short of this meant that there was no way I could get exposures from both scopes at the same time. Also at the time I didn't have the spacing quite right between the camera and reducer on the second scope and so the stars were problematic in the corners. This was solved by getting the bespoke adaptor made in one of the images above.
​

Things to think about

There's a couple of software options out there for dual scopes. The thing to remember is that in an ideal world you would have software that can control two scopes knowing what the other one is up to. So that when the flip is taking place for example in the one scope, then the other one has stopped taking images until the flip has finished.....Or that the flip on the first scope doesn't take place until the exposure on the second has finished.

Prism is once such software programme that allows dual scope control. This will ensure that the scopes can dither as one will wait for the exposure to finish before the dithers are coordinated. It takes a lot of coordination. To that end I use SGP for my data collection.It doesn't offer any dual camera control but I can work around that in the following way.

Scope 1 controls the mount - The target selection, the plate solve and the guiding interfacing with PHD. Then I have a second instance of SGP opened that controls scope 2. This is set to purely take images all night, as a slave really. To this end, when scope 1 flips you will lose the exposure in scope 2 as the chances are that it will be in the middle of an exposure. When the target changes, you'll lose the exposure in scope 2.

Both scopes are set to focus at every 1 degree temperature change. As they are running with a separate guide scope this goes on without affecting the guiding.

I can't dither with this system, so I use a bad pixel map to get rid of hot pixels... it works perfectly well.
​

Connect both scopes to SGP (you will need two instances opened up). Using scope 1 find a nice bright star and put it in the middle of the frame. Use the frame and focus menu along with the crosshairs on the screen to make sure that the star is central.

On the second instance of SGP that is running scope 2, set it running in frame and focus and again tick the crosshairs option. Then adjust the adjustment saddle until you get the bright star in the middle of the cross hairs.

You also need to use the mount controls to move the mount in the east / west and north / south movement so that you can see if the scope 2 camera needs rotating in order to match the scope 1 camera. I tend to cheat a little on this. I have an electronic spirit level and I use this along the sides of the cameras' So far this has given me a satisfactory rotational setting. I put it on the side of scope 1 camera, note the figure and then put it on the same side of scope 2 camera and rotate it until it is the same as the other camera.

The two scopes will then be aligned.

You may find that it's not perfect. In my case there's 2 variables that affect this. So I have a slightly different field of view in each scope, but it's not a deal breaker.