Simple really!! I have used extensively the Sony ICX814 sensor in the QSI690 and also the Kodak KAF8300 sensor in the QSI683. I regularly read on forums that the KAF8300 is an old sensor, past its best, noisy and something of an insensitive dog when compared to the Sony sensors.

While I was looking around for some data to merge on M42, I chanced upon some data that I could do the best comparison between the two sensors.

There are two comparisons ... ​How scientific is the first comparison?

I have used the same equipment (except the camera sensor) in this comparison. It also helps that both the sensors are in the same make of camera (QSI) as they will have the same technology etc in them.

What isn't the same is the sky conditions. The images used in these comparisons are 2 years apart.... but they are taken from the same place.

I have checked the Moon phase as well during this data capture.

The ICX814 data was taken 2 days after a new moon and the KAF8300 was taken 5 days before the New moon. To this end, the data will be less compromised by the moon in the Sony ICX814 data.

​What this comparison doesn't allow for is the difference in resolution between the two sensors......

You can see a more scientific approach further down this page.

I want to get images as large as I can..... I don't want to be binning data (which makes the images smaller in size). I also want to get the maximum quality data in the most time efficient manner. Noise is probably one of the biggest killers in astrophotography, we want the minimal amount of noise possible. In my real world example, I can get images with less noise in the same amount of time with a KAF8300 sensor...... now that's no slouch!

Also, bear in mind that the KAF8300 is a larger sensor and so you will get a larger field of view. For my type of imaging, I just found the ICX814 sensor too small and too restrictive.

​That's the real life scenario as I see it. 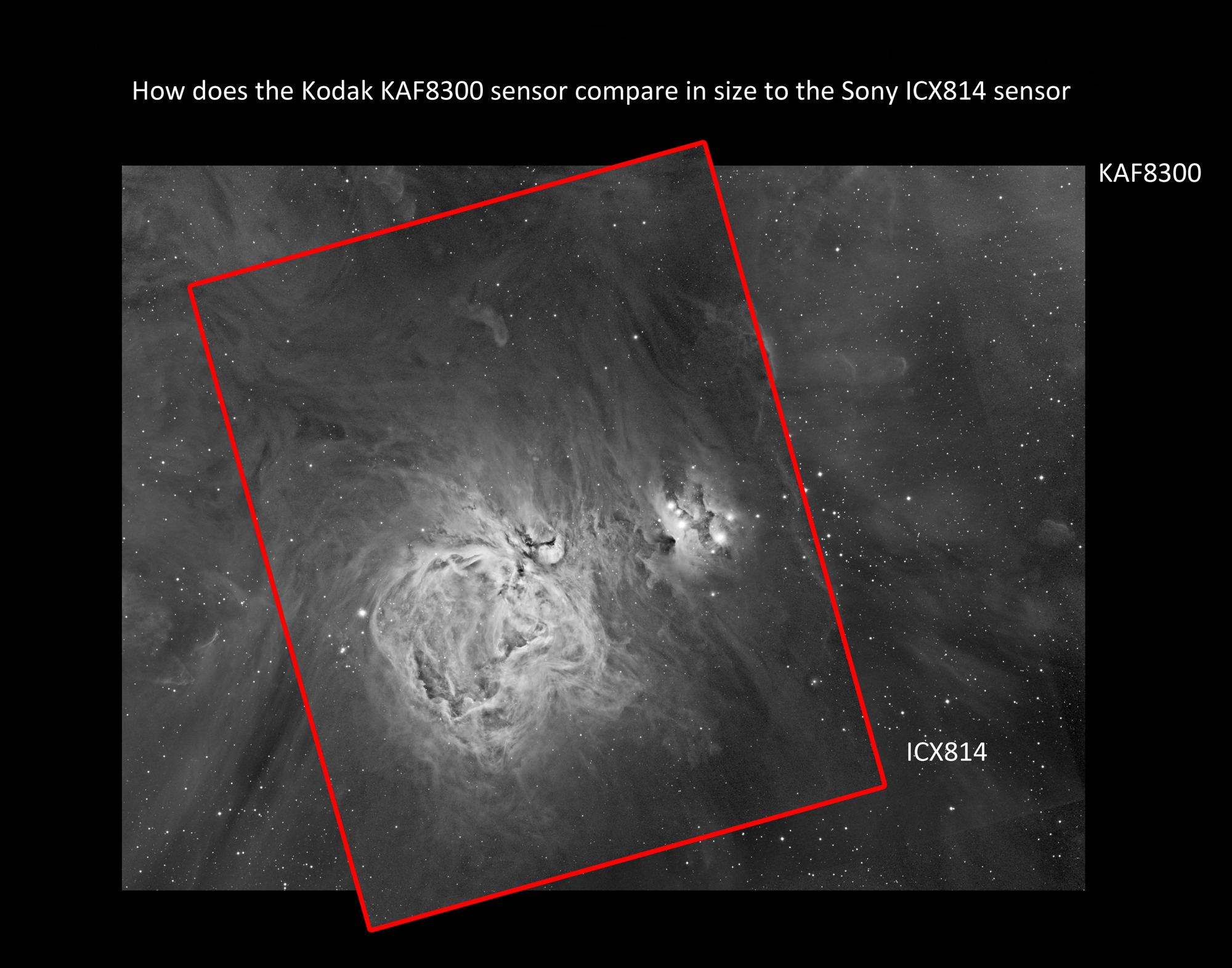 ​The exposures used for comparison

I took the same area of sky and stretched it so that one of the pixels had the same ADU figure across both images. I also made sure that I was comparing like for like with regards to resolution and pixel size, and so I registered the Sony chip data to the Kodak chip data. 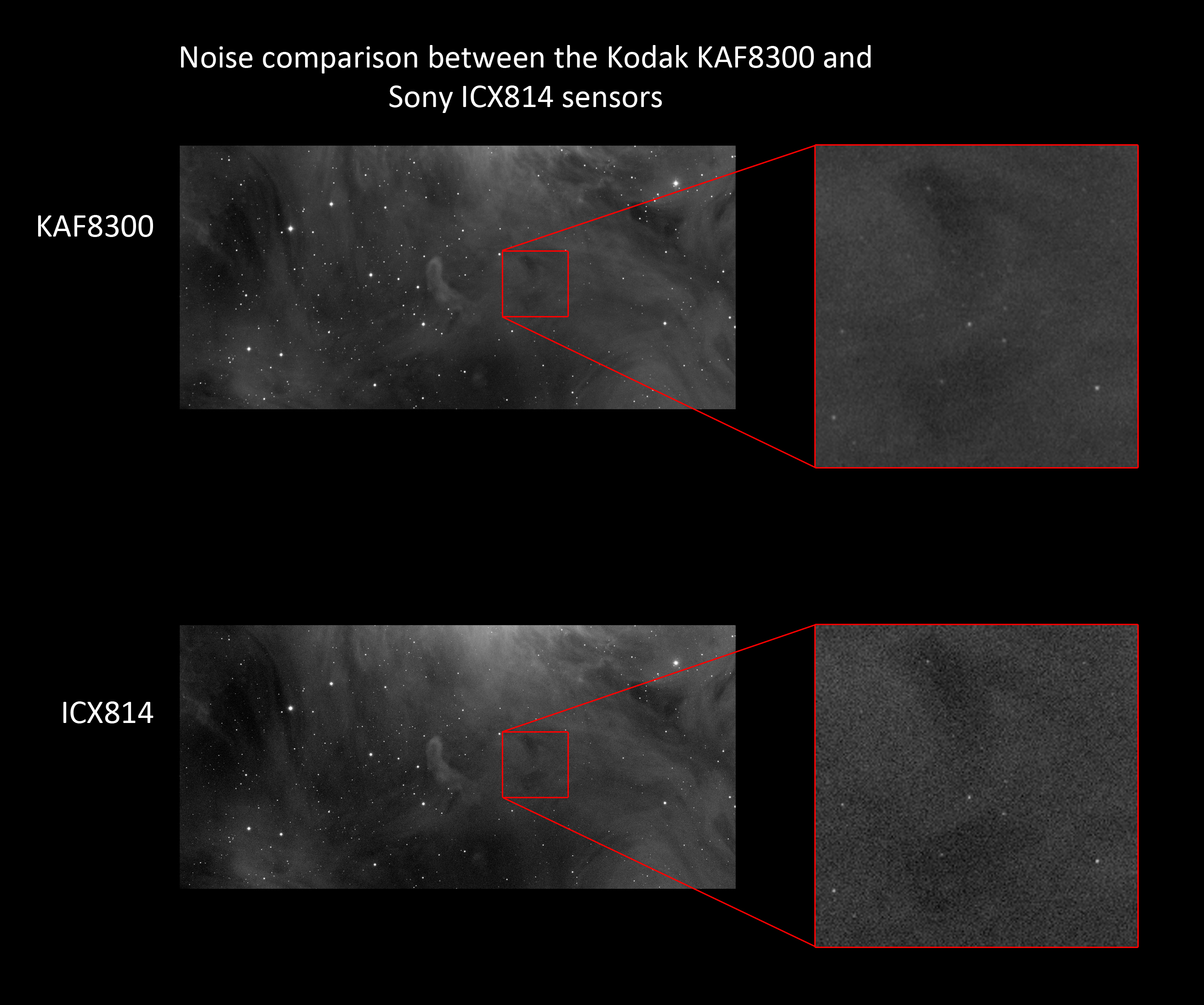 Just in case there's any doubt about the above, I also ran the two exposures through the Pixinsight Subframe selector script. This show, statistically which image has less noise.....

When I posted my original visual comparison on the Stargazers lounge forum, it was pointed out to me that as the pixel size in the ICX814 is smaller than the KAF8300 (3.69um and 5.2um respectively) I wasn't comparing like for like. In order for the comparison to have more validity the two images needed to be scaled so that the pixel sizes were the same... this was equivalent to a 1.4x bin.

Also, the two images needed to have their background levels set to the same level and the foreground too. I thank Vladimir very much for sorting these things out for me so that I was comparing a more like for like sample.

Armed with a much more scientific comparison, I stretched the images so that the pixels read the same ADU value and the overall image had the same brightness. I cropped the image down so that I was only looking at a background area as this is agreed to be where the signal is fainter and noise can be higher. Again there same number of exposures was used in each stack.... 14x1800s.

Imagine my surprise when I saw the following. Please note that in this case I have accidentally put the comparison in the opposite order to the other visual! 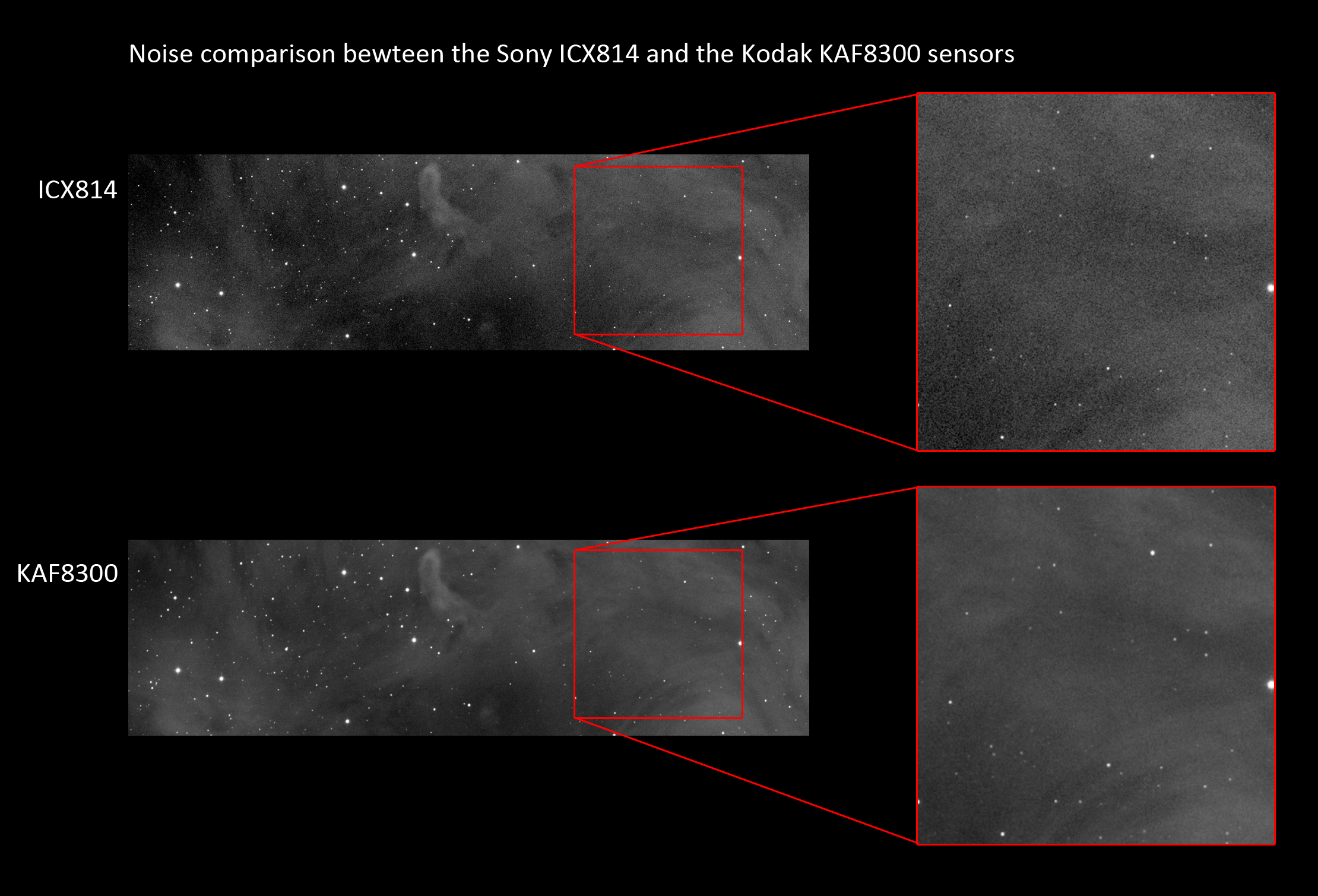 I was very surprised to see that the ICX814 was still showing a significantly more noisy image, despite the KAF8300 being notoriously noisy (according to internet opinions and theory).

Again as I said above with the previous image. These are taken two years apart and there will of course be differences in sky conditions. The light pollution between the two would be the same as they were both taken in the same observatory and in the winter there is only some street light pollution at the front of the house.

The big difference that is showing more noise in the Sony chip is likely to be due to a thin haze and / or high cloud. This will show itself as reflecting some light back to the sensor, which could explain why, when the images get an identical stretch, the Sony data is very much brighter than the Kodak and also lacking in a lot of contrast.

Conclusion ...... Strictly my opinion of course!

I think that the Kodak KAF8300 gets a lot of bad press and I have to say that all of this did affect my buying choice in 2014. I thought that the KAF8300 would be noisy and difficult to use. In reality, nothing can be further from the truth.

​In a real world scenario, the KAF8300 gives a less noisy image in the same amount of time as the ICX814 (if you do not want to bin your data). This is what I am interested in... not the theory and statistics.

Added to that I get a larger field of view with the KAF8300 and that's enough evidence for me to pick the KAF8300 over the ICX814.